Hey, I know I’ve been MIA for a while but that’s because things have stagnated a bit. Nothing is really happening that I wanted to tell you about. I think I need to change my energy. I’m beginning to worry about silly things and I think that is slowing my progress. I’ll probably watch some Oprah Life Class tonight to try and get myself together. But don’t worry. Giving up is STILL not an option and it will never be.

Well, next show I’m doing is at Shaw’s Ball Park in Kenly, NC. I’m a little nervous about it actually. It will be the first time I’ve done a show with tracks instead of my live band. I THINK it will anyway. I’ve been thinking of asking them to do me a favor and come out but, I don’t know….Anyway, here is that info. I know it says Sundays but this is actually on Friday, Sept. 2nd. 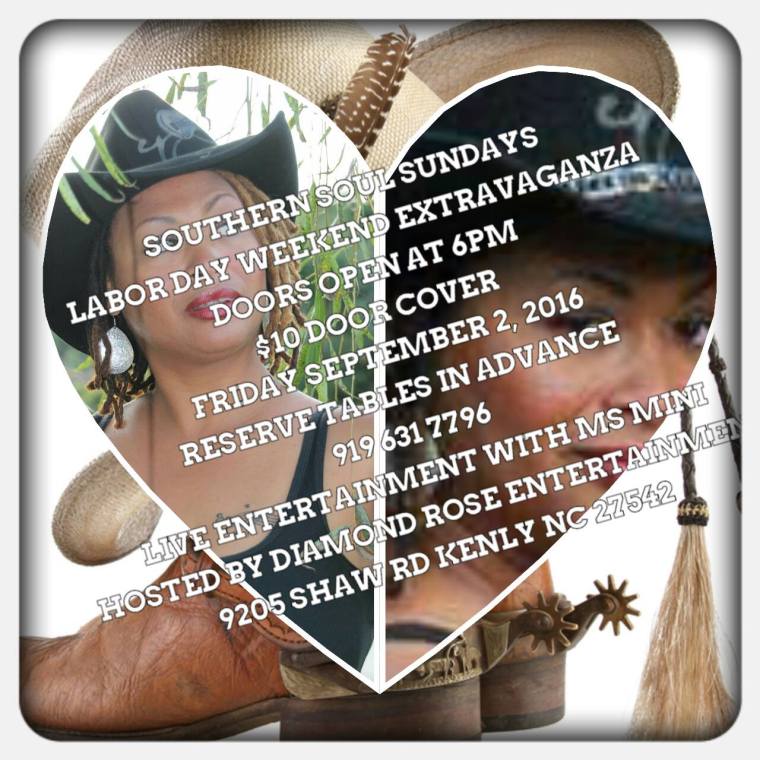 THEN the very next day, Saturday Sept. 3rd, I’m in Ahoskie, NC at the amphitheater. I will definitely have the band with me there. I’m looking forward to this one! Ahoskie won’t know what hit ’em. MISS MINI IS COMING!!!!  The poster has changed a little because it turns out that Big G won’t be there. He has been replaced with Black Diamond.

Both of these shows should be a blast. I know they will be for me anyway. Speaking of the tracks, I need to get to work on them. I have been putting it off because I really don’t want to use them. But if I must they need to sound right!

Oh, I almost forgot. I got in touch with Dr. Nick, who is the premier Southern Soul DJ in the Washington DC, Maryland and VA area. He hosts a show called Southern Soul Rumpin’ on WPFW 89.3 FM . I sent him my songs and he loved them. He has promised to spin “Ole School Style” for the next few weeks but can’t decide what to play after that because he likes so many of my songs! That pleases me to no end! So I’m stretching out…Slowly but Surely…Here he is with Lady C, the other host of the show.

I also got a little secret for y’all…I’m working on a new song (shhhh). Actually this time I didn’t write it. A DJ down in Mississippi named Mike Darden ran across my music and thought I would be perfect to sing a song he wrote. I tend to be skeptical when people say they can write but when I listened to it, I could actually hear myself singing it! I really like the song and when I finish it, I’ll give you a little preview.

That’s all for now. Keep listening and I will try to get better at this. I’ve been told that I need to start posting more videos….I’ll work on that. Thing is, I’ve always found live videos to be a bit presumptuous. I mean, it’s like you are just assuming that people want to see you, and hear you speak on whatever…I guess I’m wrong about that. People actually like that.  I myself am a reader. I’d much rather read something than watch a video about it. BUT THAT’S JUST ME. Bear with me y’all. Anyway, I appreciate the time you have taken to read this. Please feel free to comment! I would like to see what you all think about whatever! BYE

Heeeeyy!!! Happy New Year ya’ll!!! I’m very excited about this year. Why? You may ask. Well, I’m doing some stuff I haven’t done before and I’m anxious to see how it plays out. On both the Southern Soul and Beach side, I’ve got stuff planned. Let’s jump right in shall we? First, let’s talk about […]

Lakefest and Other Stuff

Hello, hello…. Let’s jump right, in shall we? I haven’t been doing any shows for the last couple of months. The last thing I did was Lakefest in Clarksville, VA. That was July. Obviously, it’s now September. Since I wasn’t so busy, I decided to take a small respite to work on recording and wouldn’t […]

Hello everyone! I’m just realizing that I haven’t done this since January. I hope you haven’t completely lost interest but whoever is still hanging in here with me, thank you. There’s just been so much happening and so many changes that I would have probably been posting every week if I told you everything. I […]

Hey people! I have a new song. It’s not Miss Mini and Pressure Point though. This one is a southern soul song I was working on before there was a Pressure Point! It’s called “Ride” and it features Black Zack. Now, when I came up with the idea for the song, I knew it needed […]

I’m just now seeing that I have not done a blog post since September. I’m hanging my head in shame. I’m really only doing it now because I borrowed a speaker from James Parker, manager of the band I started out with waaaay back, and he told me that he actually reads these! So, I […]

Join the Fan Club with PayPal