Hey folks, so, this past Saturday January 14th was full of stuff so let’s just dive right in. My day started off around 1 pm when I woke up. I had rehearsal with my band at 2 so I needed to prepare. (Yes, I got out of the bed at 1:00 pm. Don’t judge. I’m a musician!) This was a particularly exciting rehearsal because I was going to meet my new bass player for the first time. Remember the last post where I was belly aching about losing my old standby, Andrew? Anyway, the new guy’s name is Osbert Osborne. I was told he was good so I was anxious.

Now, get this…It turns out that 20 something years ago, Andrew, my former bass player had gone to see Lee Fields in concert. Andrew had just started playing the bass and wasn’t that seasoned yet. So, he saw the bass player that Lee Fields was using and was completely mesmerized by that guy’s talent. Guess who that guy was…OSBERT OSBORNE!!!  And now he’s with me…I can’t make this stuff up folks. These little “coincidences” are constant confirmation that I am on the right path. Side note *I don’t believe in coincidence. I just used the word for lack of a better one. EVERYTHING happens for a reason.*

Anyway, it turns out that Osbert also played with the group SLAVE for a while. So, yet again, change has proven to be a positive thing! So, we rehearsed and everything went well. We will be getting together again this coming Saturday. I think I will video some of it and share it with you.

As soon as I finished rehearsal, I had to hurry and get dressed to make it to this… 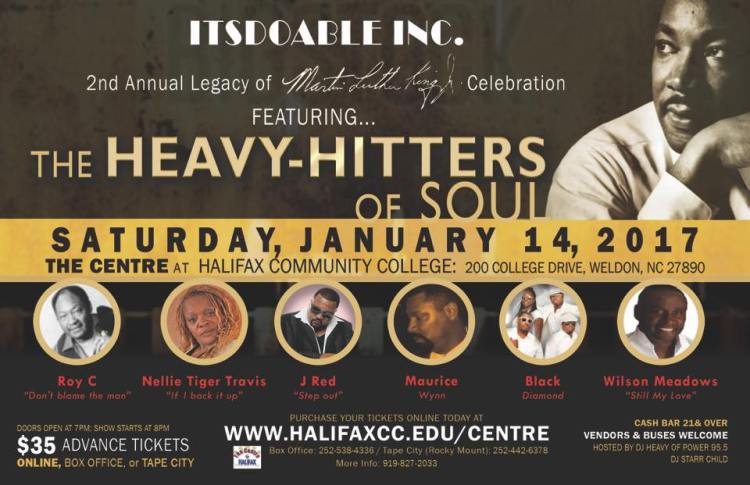 Now, I wasn’t on this show but so many of my friends were that I had to see them. The only one I hadn’t met was Wilson Meadows and I STILL didn’t get to meet him unfortunately. By the time he came out of his dressing room to go on stage, my stomach had already led me to the fish plates they were selling outside. I hadn’t eaten all day and that plate gave me a new lease on life but I digress!!!  #StillMyLove

I actually got to sit and talk awhile with my Southern Soul Godmother (her unofficial title in my head) Nellie “Tiger” Travis. #IfIBackItUp It was REALLY great to see her again. We talked about everything from losing weight to cheap jewelry and it was magical.  Just in case you didn’t know, this lovely lady will be appearing on the Tonight Show with Jimmy Fallon in two more days! He featured her song “Slap Your Weave Off” a few weeks back and now she’s going there to perform it LIVE! That will be Wednesday January 18th @ 11:35 pm on NBC. Make sure you tune in. We need the highest possible ratings for this one. Yes, this is a major move for Nellie but it could also reach back and pull some of the rest of us up as well. If featuring a Southern Soul artist produces high ratings for the show, guess what? THEY WILL KEEP DOING IT!  Our music may finally begin to get the national recognition it deserves and Nellie is blazing that trail. I am honored that she is my friend and I know she will only continue to do great things. Anyway, here we are. (You knew I had a pic!) 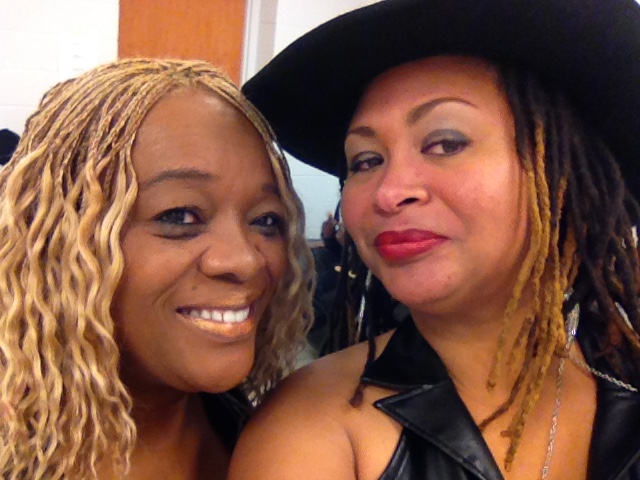 This time, I also got a pic with Roy C. As much as I see him, for some reason I just never took a picture with him. So, here it is…As usual, he put up a great performance. The people still love this living legend and he hasn’t skipped a beat. He still sounds great and is still very entertaining to watch. By the way, I didn’t let him hug me this time 😉 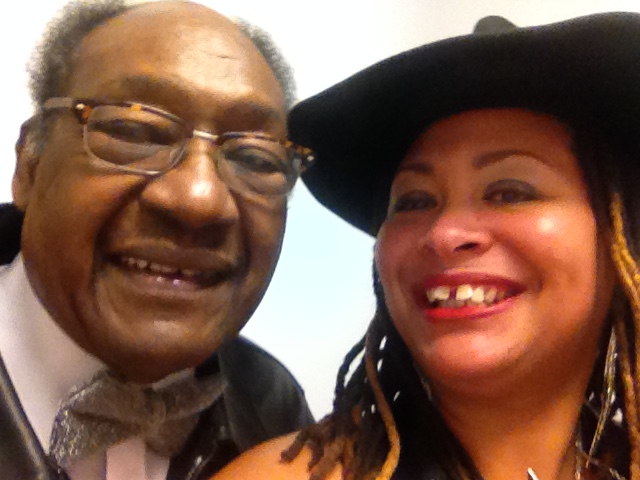 Now, this is  GOOD so pay close attention. You ready? OK, at the last minute a new act was added to the show…Big Pokey Bear. Yes, Mr. Sidepiece himself. The thing is Maurice Wynn does quite a few cover tunes and “Sidepiece” is one of them. So, no one told Maurice that Pokey was going to be there. AND…that’s right, you guessed it, Maurice decided to do the song. When he started, Pokey was sitting backstage watching Maurice and I had just met Pokey so I was giving him a little background on Maurice…THEN Maurice broke out into “Sidepiece”!! Pokey lifted his head up, immediately jumped out of his seat and headed for the stage! Guess what he did????   HE GOT ON STAGE AND STARTED DANCING TO HIS OWN SONG WHILE MAURICE WAS SINGING IT!!!!

MAAAANNN…..The look on Maurice’s face when he saw Pokey was priceless! It was OK though. The audience got a big kick out of it and you can imagine how we reacted backstage! WHEW!!! Anyway, when Maurice came off the stage, he immediately apologized to Pokey and told him he didn’t know he was there. You know what Pokey said to Maurice? He said, “Man, I’m happy as hell right now. I feel like you paid homage to me. Thank you.” That was one of the coolest things I had ever seen. He told me that this business is all about connections and that he had no problem connecting me with all the good people that he knows.  He also invited me to his studio in Louisiana to work on something with him. And you know me. Have gas, will travel!

Yes, he also performed “Sidepiece” and the audience still loved it! So needless to say, my first impression of Big Pokey Bear is that he is a lot of fun, humble as hell and just an all around good guy. And check out this smile! 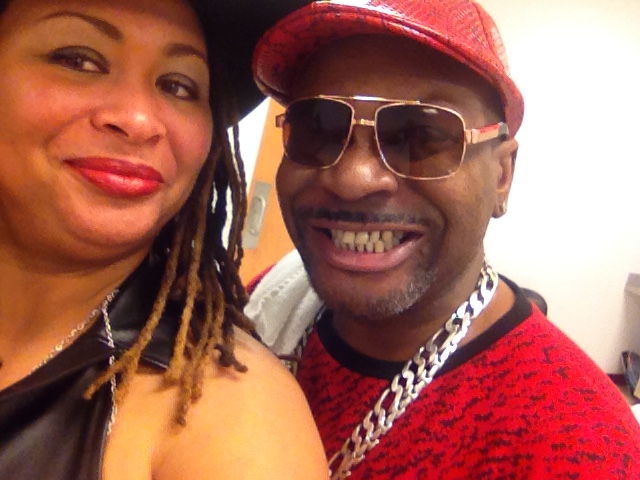 So, it was a very long day but all in all, it was a great one! I can’t tell you how much I enjoyed myself that day. It was one of the best days I’ve had in a long time. When I got home though, I finished up some apple moonshine DJ Heavy had given me and was out like a light!

I’m still working on the new album. I am SURE this one will be better than the first. I want to have it finished in time for this… 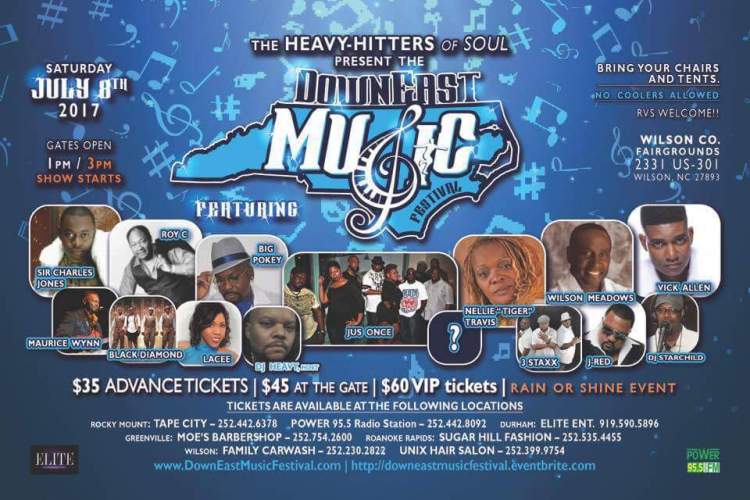 This is a HUGE show that I will be kicking off on July 8th. I’d like to be able to see my new CD there. I know my picture is not on the flyer YET. I am the question mark. HA! I don’t care if I were a cow patty as long as I get to perform. My ego does not need to be stroked!  But, this is only the preliminary flyer. I will be on the updated version. My pic and bio will also be in the program booklets that they will be handing out for this show. I’m sooo excited about this one. I will get to meet and share a stage with even more great artists! Sometimes it’s hard to believe just how fortunate I truly am…..

Anyway, that’s all for now. Keep listening…Thank you all for reading this and if you haven’t already done so, SUBSCRIBE. That way you won’t miss any of my ramblings!

2 thoughts on “About Last Saturday!!!”