I’m just now seeing that I have not done a blog post since September. I’m hanging my head in shame. I’m really only doing it now because I borrowed a speaker from James Parker, manager of the band I started out with waaaay back, and he told me that he actually reads these! So, I figure he can’t be the only one. I thank him and you for taking time out to read my posts. I would promise that I will do better but…..

Anyway, I’ve made a couple of staff changes since I last posted. I have a new keyboard player who is absolutely amazing. His name is Brian Pitt and he was actually playing for another local band, who shall remain nameless, when we met. I think I caused a pretty nasty split with him and that band BUT it worked out to my advantage because he’s now mine full-time! Everybody say hi to Brian…

I also lucked up and got his buddy Brandon Farmer who is one of the best drummers I have ever come across. This is his first secular experience playing music. He has only played in the church before he joined us. So I’m scratching my head like they do this in church? Everybody say hi to Brandon….

If you want to meet the rest of the band, here ya go Pressure Point

Now, the way that we all came together is so strange and magical that if I still believed in coincidence, I wouldn’t anymore. There is definitely some universal workings going on here. This has been shown to me again with a recent situation that happened which resulted in us getting two big gigs this weekend. Grab a drink and let me tell you this story!

I saw a flyer months ago about a Beach Music and Blues show featuring  Pat Cooley, Theodis Ealey, Jim Quick and Coastline and Clarence Carter. I immediately said to myself “I would love to be on that show.” I made a small attempt to see if I could squeeze in there but when it failed, I wasn’t too phased because I wasn’t even sure if my band and I were ready to share a stage with Clarence Carter. My only interest in the show was Jim Quick and Coastline. He told me a little while ago that he would like to put us in the studio but he wanted to hear us play first. Now, if you know anything about Jim Quick you know he stays on the road. Seeing us live would be next to impossible with the schedule that he has. I figured if I could get on a ticket with him, that problem would be solved. But, we couldn’t get on the show so I let it go.

Fast forward to the week before that show. I get a call early Saturday morning from DJ Heavy, who is hosting that show and he says “You ain’t gon believe this.” Now, you know a story is good when they start off like that. I’m not going to type the whole conversation verbatim but here’s the gist of it. Turns out that Clarence Carter refused to do the show if Pat Cooley was also on the ticket. Apparently there was some situation that went down between the two of them a long time ago and he is still sore about how it turned out. Being that Clarence Carter is the headliner, they couldn’t allow him to just back out. So…..Bingo, Bango, Pat Cooley is out and I’M IN!!! Now, if that’s not divine intervention, I don’t know what is. I now have the perfect band for the job, Jim gets to see us perform and I get to share a stage with the legendary Clarence Carter….It doesn’t get much better than this folks. Oh, and as an added bonus, there is also a show in Yanceyville the following day that I picked up too. Here are the flyers. 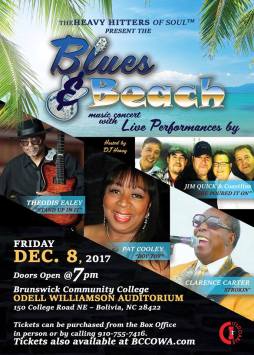 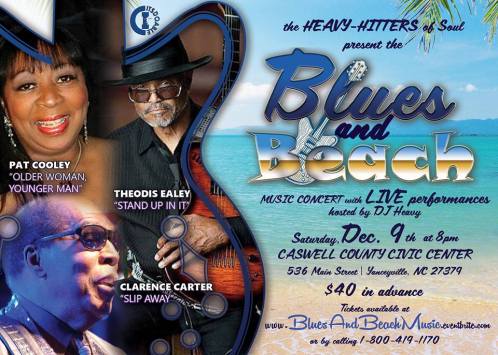 I’ve been trying not to let myself get too carried away because I may strip naked and run down the street from sheer happiness but I do understand what this means for me. It appears that I am actually getting what I asked for. I wanted my band and I to get so busy that we no longer needed regular jobs to make ends meet. This could very well be the start of that. All of the sacrifices are starting to pay off. Grateful doesn’t even begin to describe what I’m feeling right now. Next year is gonna be a BEAST!!!

With that, I bid you farewell until my lazy behind decides to do another post!

Heeeeyy!!! Happy New Year ya’ll!!! I’m very excited about this year. Why? You may ask. Well, I’m doing some stuff I haven’t done before and I’m anxious to see how it plays out. On both the Southern Soul and Beach side, I’ve got stuff planned. Let’s jump right in shall we? First, let’s talk about […]

Lakefest and Other Stuff

Hello, hello…. Let’s jump right, in shall we? I haven’t been doing any shows for the last couple of months. The last thing I did was Lakefest in Clarksville, VA. That was July. Obviously, it’s now September. Since I wasn’t so busy, I decided to take a small respite to work on recording and wouldn’t […]

Hello everyone! I’m just realizing that I haven’t done this since January. I hope you haven’t completely lost interest but whoever is still hanging in here with me, thank you. There’s just been so much happening and so many changes that I would have probably been posting every week if I told you everything. I […]

Hey people! I have a new song. It’s not Miss Mini and Pressure Point though. This one is a southern soul song I was working on before there was a Pressure Point! It’s called “Ride” and it features Black Zack. Now, when I came up with the idea for the song, I knew it needed […]

I’m just now seeing that I have not done a blog post since September. I’m hanging my head in shame. I’m really only doing it now because I borrowed a speaker from James Parker, manager of the band I started out with waaaay back, and he told me that he actually reads these! So, I […]

Join the Fan Club with PayPal